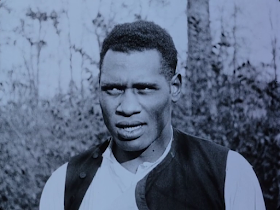 This was the world premiere of the restoration of Oscar Micheaux’s major work and an electrifying new score from prodigious jazz composer Peter Edwards: part cinematic event and part gig – we even had an encore and I wish they could just have carried on playing…

Screening as part of the BFI’s ongoing Sonic Cinema strand and the Black Star season, this restoration is also available on the titanic Pioneers of African-American Cinema box set – out now – albeit with a different score from Paul D. Miller, aka DJ Spooky.

According to Charles Musser in Race Cinema and the Colour Line – an essay in the Pioneers booklet – Paul Robeson disowned this film and used to insist that his debut film was actually The Emperor Jones from 1933.

This is a shame as he is superb playing two characters and being utterly convincing as the homicidal pretend priest Reverend Isaiah T. Jenkins. But Robeson felt he had been duped by director and writer Oscar Micheaux who was taking pot shots at a number of plays about black culture written by white writers, in which the actor had starred.

Eugene O’Neill’s All God’s Chillun Got Wings and The Emperor Jones along with the now obscure Nan Bagby Stephens’s Roseanne had all featured Robeson and helped establish him as a stage force. But the actor seemed unaware of Micheaux’s agenda until after the film was made… maybe the lure of cinema was too great to resist or at least the potential profit share.

But what we see now is far shorter than the original nine reeler and something has been lost in terms of the narrative balance of another complicated story from this director. Robeson wouldn’t be the first actor to find their work cut out of all recognition.

He is so very watchable though, a handsome and energetic presence who switches from the good brother Sylvester to the bad seed Isaiah with ease. He’s an escaped convict who makes a living fleecing his deluded flock in order to support his gambling and drinking. Robeson even makes a good drunk, staggering around his house in the early hours applying ice to his temples (c’mon, we’ve all done it!).

I’m beginning to get my eye in with Micheaux and his spoofing of organised religion is relentless from the boorish, Uncle Tom preacher of Within Our Gates to the “Reverend” Jenkins’ drunken sermonising in this film. He also paints the congregation as either bored or complicit in the ecstatic distractions of the Holy rolling… in his view perhaps not so different from the bars and gambling dens the gangsters inhabit.

He hits his targets over the head but his sense of humour is there throughout and you can see it in the performance of his actors who look so relaxed and unafraid to push the emoti-boat out.

Mercedes Gilbert is an example as Sister Martha Jane in many ways the story’s centre as the mother who falls prey to the Reverend’s lies and criminality. There’s a lot of swooning but there’s also a glint in the eye as she addresses the audience through the most outrageous elements – tragedy and comedy so closely aligned.

Her daughter, Isabelle, is well played by Julia Theresa Russell who is both frail and brave refusing to buckle under the physical domination of the rotten Reverend.

Lawrence Chenault provides a suitably twisted turn as 'Yello-Curley' Hinds, Jenkins’ former cell-mate who spies his pal preaching with his beady, evil eyes. Chenault’s quite a feature on the Pioneers box set and is very entertaining.

Other caricatures repeat from the other Micheaux films with Marshall Rogers as a sleazy speakeasy proprietor and a delightful double act of Lillian Johnson as "Sis" Caline and Madame Robinson as "Sis" Lucy, two Pious Ladies of excitable disposition. The clichés were no doubt all true and these folk would have been recognizably real to their audience.

It’s Robeson’s show though as the “Reverend” Jenkins slips further and further down the slope to eternal damnation as his booze-funding church con runs into extortion, sexual violence and ultimately murder. It’s a physically-dominant performance as he towers over the rest of the cast yet falls victim to his own ability to wield force.

Peter Edwards and Nu Civilisation Orchestra – Rob Ansty on Bass and Moses Boyd on Drums – were caught up in the action themselves and played a Micheaux-mix of muscular jazz that connected forcefully well with the spirit of the film.

The music loped one minute and slammed its fist down the next, pulling the audience along in syncopated harmony with the mischievous spirit of this play on meanings. Edwards looked around the audience at the end and acknowledged there had been “something in the air”. A good gig all round!

The Pioneers ofAfrican-American Cinema box set is available now from the BFI online shop. My fuller appreciation is here. Black Star continues through December – details on the BFI site.

The further adventures of Peter Edwards and Nu Civilisation Orchestra can be followed on their website.