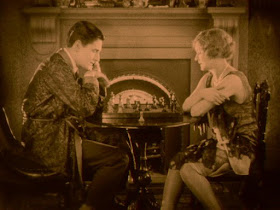 Watching Alfred Hitchcock’s The Lodger, a Story of the London Fog (1927) for the third time on the big screen, I can’t help wondering about the director’s political thinking. It’s probably been said before, but in the context of the late twenties, a film about hysteria roused by frenzied media coverage and leading to vigilantism and mob justice is not just about a serial killer… then again, it has been a long week; your mind is prone to wonder in Pordenone.

The real issue is how the public respond to the feeling of a murderer in their midst, an “other” set to destroy their way of life and someone who could be any one of them… This is the self-imposed terrorism of the newspapers we buy and the gossip we make and it is of course as old as the hills and always current. As Neil Brand said in his introduction to the 2017 premier at the Abbeydale in Sheffield, Hitchcock has made voyeurs of us all: we’re as obsessed with the vicious fantasy as the folk on screen and we lap it up all the same.

The story is not really about the murderous Avenger but how someone is perceived based on prejudice and human weakness. Ivor Novello’s lodger, Jonathan Drew is a jazz-age Man Who Fell to Earth, an alien in style and manners who is both “queer” and “doesn’t like girls” according to the title cards and this is more about his strangeness than any sexual statement. Who else to have cast in this role but a man with the same androgyny as David Bowie, whose Thomas Jerome Newton fifty years later, was scarcely more alien in the context of the earthy East End.

Then there is June Tripp’s character who is positively seeking otherness, bored with her plodding boyfriend, over-eager copper Joe Chandler (Malcolm Keen) … she’s a feisty character and not given to hysteria and you know she’d be the practical one in any future relationship for her lover is deep in grief and needs her support – in every sense she saves Jonathan.

There’s an intimacy established with The Lodger’s characters so quickly, from the girls backstage at the Golden Curls show – reference in the opening montage and at the close – as the gobble up the news, to the Bunting household with father (Arthur Chesney) and especially mother, the peerless Marie Ault who’s Irish accent you can almost see on screen!

The Lodger is a bold creative enterprise from the title cards right through to the shot-making, story and performances. It needs a score to match… and Neil Brand has delivered something Alf would thoroughly approve of. 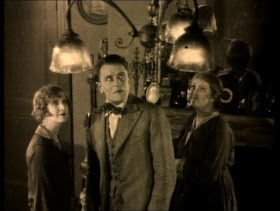 This is the second time I have seen the film with Neil Brand’s orchestral score and I have to say it is even better than the first: this is a soundtrack “in love” with this film’s characters and narrative and which works through the core of the film via a joyful osmosis; a duet between old and modern in totale simpatia. As with all of Mr Brand’s scoring, there’s a wealth of knowledge at work about the practice and those who have perfected it and one can hear echoes of Hitchcock’s future and past in the music.

This is one of the most re-watchable of silent films and the music recognises that and works with it; it’s composition that pays due diligence to audience expectations and is simply fearless in respecting the source and our ability to interpret the musical signals. The music is without pretence and is an honest, daring tribute to the watched and the watchers; it completes Hitchcock’s project goals by working on our voyeuristic involvement in the sensational story, June’s bath and the chess match by the fire that makes ‎Steve and ‎Faye’s Thomas Crown affair look like a bored game.

As the last act of Le Giornate it’s pretty much the perfect choice; beyond meta as a cinematic experience and, whilst it works on an immediate level, it’s a connoisseur’s delight: good vintage, delivered at the perfect temperature in the best silent restaurant in town.

Before the end, there was still some interesting business to take care of. Sadly, I missed Colleen Moore’s rags to cinema comedy, Ella Cinders (1925) but I did make myself acquainted with “The King of Clowns”, Swiss-born Adrian Wettach in Son Premier Film (1926). Wettach – stage name Grock - had extraordinary physicality, a dynamic athleticism gained from his circus days and here, even at 45 his athleticism and energy are impressive as is his range of expression; positively Chaney-eque.

This first feature, natch, had him chasing his inheritance to Paris and getting involved with show people after his things are stolen. It’s French Whimsy alright and I have to say I prefer him without the make-up… too many clowns and Jokers this year.

William S Hart wasn’t joking though, certainly not in Blue Blazes Rawden (1918) when the high plains drifter was cast as a fierce woodsman in the “forest frontier” of the Canadian northwest of the 1880s. Jim Rawden is as wild as the wind, and when he comes into town for a good tie m with the boys he immediately comes head-to- head with the crooked English bar owner,  “Ladyfingers” Hilgard (Robert McKim) who tries to cheat him at cards and then gets an accomplice to empty Jim’s gun and sets up a fight he can’t lose… 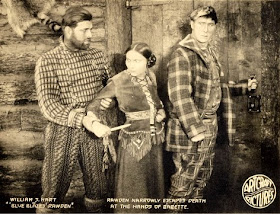 As the two men face off, and Jim realises he’s firing blanks, his sheer rage puts Ladyfingers off and too frightened to shoot straight he falls. English to the last though, Hilgard asks Jim to lie to his mother and tell her he was a good man.

Thus it is that when she (Gertrude Claire) and her other son arrive, Jim goes out of his way to do the decent thing and tell her what she needs to know. Once again, his character have been “saved” by an honest white woman and this one of his own age too… (I wasn’t joking on that point M!) – Claire was only 12 years older than Hart.

Maude George plays the wilful Babette DuFresne, half French-Canadian, half-native American who loves Jim and wants him away from these people. As the Diane Koszarski notes in her film notes, Maude “…had been cast as morally suspect foreigners and vamps at Universal, Triangle, and Selig…” and was therefore ideal for the role. 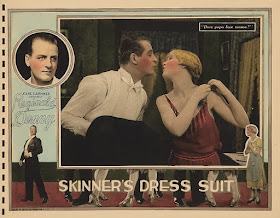 It’s been quite a week for Hart and also for Reginald Denny whose final film was perhaps his funniest. Skinner's Dress Suit (1926) is that rare thing, a genuinely charming comedy featuring two vibrant leads – Denny and the lovely Laura La Plante who cuts a rug almost as sharp as her platinum bob. In thrilling style, the two dance the Savannah Shuffle…. a variation on the Charleston – before leading a host of society types in trying to learn the steps.

Denny has such an affable presence and is a precursor of the pre-code talkies to follow with his measured, realistic emoting and perfect sense of timing. And he can also dance, the Savannah Shuffle needs to be brought back; someone needs to tell Strictly/Dancing with the Stars…

As I type, I’m at Venice airport waiting for my delayed flight back to Britain… more time for coffee and reflection on another special week with silent pals on and off screen. Grazie molto Pordenone and let’s do it all again in 2020 however long the passport queue has become by then. 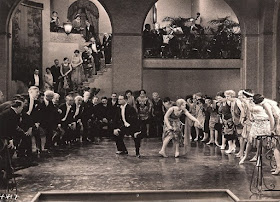 PS Many, many thanks to PH: Britain's Queen of Bloggin'. Her daily updates have been so stylish and informed, you can read then all on her Silent London site.

If blogging is like jogging then this has been a marathon. But a fun run all the same!
Ithankyou at 00:45
Share